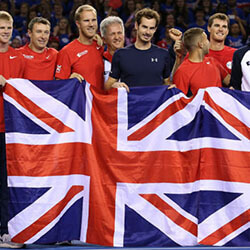 Great Britain has unexpectedly won a free pass to the Davis Cup finals week, taking place next year in November. The free pass comes in the form of a wild card that was issued by the International Tennis Federation – a move that has been met with much controversy.

The idea behind the wild card is that two of the 18 teams set to take place at the Davis Cup finals would be picked by hand, rather than earning a way into the finals through qualification. It’s one of several new aspects that have caused some controversy for the event, and many have made it known that they disagree with the ITF’s actions.

The Lawn Tennis association’s chief executive Scott Lloyd has welcomed the wild card, explaining that it saved the British team from having to compete in a qualifying round. He stated that although there was no vote for the Davis Cup reforms, him and his team would support the ITF and the ways in which the competition was changed.

When questioned, ITF president David Haggerty stated that one of the factors that Britain’s excellent travelling support has been a factor in their decision, and with the game being played at either Madrid or Lille, it would be easy for British tennis lovers to visit the event.

The current Davis Cup is also one of the first that has seen Roger Federer and Stan Wawrinka deciding not to attend.