A History Of Nasty By Nastase 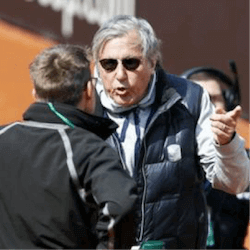 Nastase And His Nasty Attitude

Ilie Nastase is a relatively well know figure in Tennis and a card carrying hall of famer, but recent events has cast a shadow over his former tennis glories.

In a recent Fed Cup match, Nastase let loose a tirade of abuse at British Woman’s Captain Anne Keothavong and did not hold his tongue for 23 time Grand Slam winner Serena Williams. His sexist remarks led to Anne walking off the court and later his remarks about the colour of Serena’s unborn child left a sour taste in everyone’s mouth.

Suspension By The ITF

His behaviour has left the ITF no option but to suspend him from their events.

Johanna Konta who was also on the receiving end of Nastase’s abuse as Anne Keothavong’s partner said that Nastase would ask her if she is still a virgin every time he sees her.

This started when she first came to the Fed Cup tour as a teenager.

A History Of Bad Behaviour

As people who know him well will tell you, this behaviour is nothing new to the man that was once known as Nasty Nastase.

In the beginning, Nastase managed to walk a fine line between crowd pleaser and outright bully. One of his earliest achievements was being the first player to be ranked world number one in the ATP rankings system when it was introduced in 1973. He also defied a strike by tennis players the same year.

This led to the ATP fining him $5000 and the All England Club still refusing him membership to this day. He quite dryly stated that he might have to push an existing member down the stairs so a place opens up for him.

Most memorably he met his match in 1977, facing John McEnroe. In fact even the legendary foul tempered McEnroe said that the match was the circus of all circuses thanks to the antics of Namaste.

In fact, the match was called off at one point by the umpire, awarding the match to McEnroe. Crowd unrest however made a veteran referee continue the match, which eventually went to McEnroe anyway.