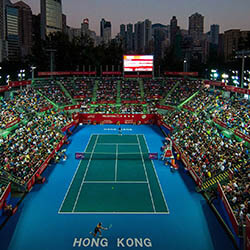 The Hong King Tennis Open has been postponed due to the on going, widespread protests that are taking place within the city. The tournament was initially set to start at the beginning of October, but the time has been moved back. Organisers have stated that they would rather have the tournament at a later time when things are running smoothly again.

Hong King has been rocked in recent months by a series of increasingly violent protests that were triggered by an extradition bill passed by the government. The bill has since been removed, but protests have continued, with many demanding a more democratic approach to government and voting in the region.

The tournament was set to be held at Victoria Park, which is a large green park with tennis and basketball courts, as well as playgrounds – but the park has become a rallying point for many of the anti-government protests that are currently underway.

Organisers have confirmed that they are in active discussion to choose a later date for the event, and added that the event attracted many thousands of locals and travellers each year. The tournament has hosted a number of notable athletes in the past, including Naomi Osaka, Caroline Wozniacki, and Serena Williams. Transport to and from the city’s international airport, which is one of the busiest in the country, has suffered major disruptions in recent weeks, meaning that entering and leaving the city in the foreseeable future will make any large, tourist-focussed events almost impossible.