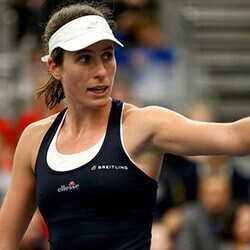 Johanna Konta recovered from a set down to claim victory for Great Britain over Greece for their Fed Cup round robin tie match. The British number one beat Maria Sakkari 4-6 6-2 6-3, proving to be a formidable opponent to their Greek counterparts. Victory in the doubles sometime later was completed with a 3-0 win.

Earlier, British Katie Boulter had survived a scare but went on to beat Greek Valentini Grammatikopoulou 6-3 4-6 6-4. Their results means that Great Britain will lead the charts if they manage to beat Hungary in their upcoming game. Their latest win follows on from their victory of 3-0 against Slovenia, and has given the country a better chance to reach a third consecutive World Group II play off.

Konta, who is world number 39, sealed her second singles win after a two hour and 42 minute match against Sakkari, who is ranked just one above her, and who netted a backhand during Konta’s second match point. While both players with frustrated at times during the game at what they believe were questionable line calls. Sakkari called it out later, describing one of the judges as one of the worst that she had ever seen in her life.