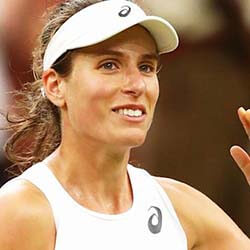 Former British no. 1 Johanna Konta has called time on her professional tennis career.

The 30-year-old in 2017 became the first British woman in over 30 years to reach a Grand Slam quarter-final. That also happened to be the year Konta reached a career-high ranking of world No. 4.

Born in Sydney to Hungarian parents, the star moved to Britain with her family at the age of 14. She started representing her new home country in 2012, and seven years later, in 2019, she led Britain out of the zonal divisions of the prestigious Billy Jean King Cup for the very first time in more than 26 years.

Konta has however battled a niggling knee tendon injury for the past number of years. The injury has required ongoing treatment, which restricted her to a very limited schedule on the court. Even so, Konta, during a commentary on the reasons for her retirement, said the injury had not been a leading contributing factor in terms of her decision. She said she simply no longer had the energy to play at the highest levels of the sport.

The British star only really reached the higher levels of the sport at 24 years of age, when she made her way into the Top 100. This was in 2015, after Konta had already spent most of her career on the ITF circuit.

Konta earlier this year became engaged to film maker Jackson Wade. The pair has started a dog walking business together.