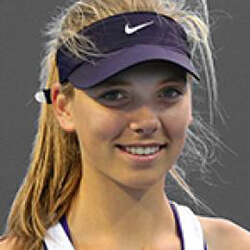 British Katie Boulter has been removed from the St Petersburg Open after she lost to Katerina Alexandrova, while Maria Sharapova has been forced to withdraw due to injury.

She had originally lost to Ysaine Bonaventure 7-6 (7-3) 4-6 2-6 and had failed to reach the main draw. Bonaventure controlled most of the game, and despite Boulter’s 4-3 lead, she lost her serve twice as the Belgium player took over. Although the 22 year old was beaten in the qualifying round of the Russian tournament, she still managed to retain a place in the main draw thanks to the withdrawal of Dominika Cibulkova.  Alexandrova shot 17 aces to Boullter’s six, and will be facing Tereza Martinvoca for the next stage of the event. Despite winning the second set during her game, Boulter became stuck against the Russian player and eventually lost 7-5 4-6 6-1.

Earlier, Maria Sharapova’s withdrawal was confirmed as she left her home tournament over a shoulder injury. The former world number one was set to play the third seeded Daria Kasatkina for the quarter final position. Talking about the injury, Sharapova said that she had tried to do everything possible to be ready to compete in the event, but that her right shoulder has been a continued problem for her. She added that she will be meeting with a team of doctors over the next few weeks to evaluate the situation, and that she looks forward to returning as soon as she possibly can.