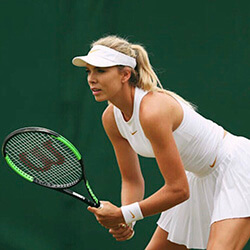 British number two Katie Boulter has not managed to reach the main draw of the Indian Wells after losing during the final round of qualifying to Swiss Vickorija Golubic. 22 year old Boulter lost 6-4 6-3 within a time frame of one hour and 25 minutes to the world number 82. The British player, who is currently ranked at 85th place, was sixth seeded in qualifying, and was hoping to reach the main draw in California for the first time.

Dan Evans is just one win from the main draw after he beat Belgium’s Ruban Belemans for the opening qualifier. The British number three, who recently moved back into the world’s top 100 not long ago after returning from a drugs ban that lasted a year, saw a 6-4 6-4 victory against the 31 year old, who is 145th ranked in the world.

28 year old Evans is now set to take on American Noah Rubin, ranked 153rd in the world, and is aiming to join three other British players for the main draw at the combined WTA and ATP event. Johanna Konta, currently sitting at rank 45, is now the only British woman that will be participating in the main draw. Konta, who is number one in her home country of Britain, will be facing French world number 54 Pauline Parmentier in the first round.

Kyle Edmund, leading male player for Britain, has had a first-round by as one of the 32 seeds currently taking place.