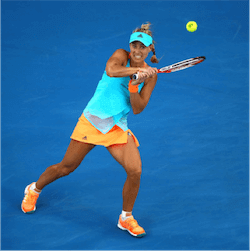 We are now heading into the final week of the Open, which ends on the 28th. It has been an exciting tournament so far with Kerber clinging on to become the only Grand Slam winning female player in the running for top honours at the Open.

With her 88th world ranking, many fans wrote off Hsieh Su-Wei, especially as she was facing the former champ, Kerber. Su-Wei however is a formidable tennis player with her unorthodox style being her deadliest weapon.

Her double forehand and backhand posture has made her appear unpredictable to her opponents who often struggle to keep up with this powerhouse player. In the first set between Kerber and Su-Wei, Su-Wei dominated. The set ended 4-6 in Su-Wei’s favour.

In fact prior to this match many pundits saw Su-Wei pushing through into the quarter finals. Her beautiful wins against world 26th Radwanska and third seed Muguruza made sure that those fans unfamiliar with her unique playing style now knew her name.

Unfortunately Kerber was the better player, taking the final two sets 7-5, 6-2. It wasn’t too much of a surprise as Kerber has just come off an amazing win against the returning Maria Sharapova. Now that Su-Wei has been knocked out by Kerber the player to overcome for the title many believe is Madison Keys from the US who this weekend trounced Carolina Garcia in a show of strength for her competition.

While there were many excellent encounters this weekend, it was Dimitrov and Kyrgios’s epic night battle that stole the show. Kyrgios had more than twice the number of errors of Dimitrov, a risk you cannot take with a player who nearly toppled Rafael Nadal barely a year ago.

Even though Kyrgios fought back with his serve and hammered home a series of aces, it wasn’t enough to keep up with Dimitrov’s relentless attack and defence regime. The final scores were 7-6, (7-3,) 7-6, (7-4), 4-6, 7-6, (7-4). Even though this was a once in a lifetime match to witness, many home fans still left with a heavy heart as Kyrgios showed the promise of being the first Australian player to take home the Open gold in 42 years.