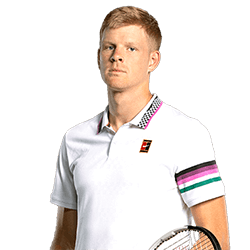 British number one Kyle Edmund has had to leave to the French Open after retiring from his second round match against Uruguayan Pablo Cuevas due to an injury of his left knee. The 24 year old was trailing 7-6 (7-3) 6-3 2-1 when he shook hands with Cuevas, who is currently 47th in the world. Edmund was hoping to reach the last 32 of the French Open for a third time.

Talking about his retirement, Edmund told reporters that he didn’t quit because he wanted to, but rather that sometimes it has to be done. He added that there have been a number of times in the year where he carried on and nothing ever got better, and sometimes a little worse, in regards to his knee. He lastly added that he doesn’t need surgery right now, and that he intends to have it sorted as soon as possible.

The Yorkshireman confirmed that he is managing a long-term problem with his knee, but believes that he does not require surgery, and that he will be ready for Wimbledon. He believes that he will be ready for the grass court season, which will beginning for him at Queen’s later in June, and then when Wimbledon starts in July. With his leaving from the Roland Garros courts, Johanna Konta is now the only British player left in the French Open singles, but Konta has been holding on to her position fiercely from the beginning of the event.