Kyrgios Forgiven for the Davis Cup 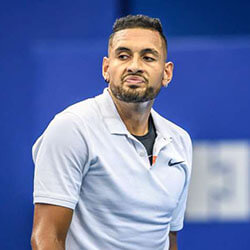 Turns out Tennis’ heavyweights won’t be boycotting the new and improved Davis Cup after all. Top celebrity players like Rafael Nadal and Novak Djokovic will be in Madrid for the inaugural 18-team finals, accompanied by a daunting line-up of Australian athletes like Alex de Minaur and Nick Kyrgios, who will be making his return at the premier international team event for men’s Tennis.

You read that correctly.  Kyrgios is making his comeback, and we know this thanks to Australian captain Lleyton Hewitt recently naming his finest possible squad. This will be the dual Grand Slam quarter-finalist’s first appearance on the courts since February 2018, and he will be playing alongside Minaur, John Peers, John Millman, and Jordan Thompson.

Kyrgios is currently under a six-month probation period which was handed to him after his horrifying meltdown in Cincinnati in August, after which he branded the ATP as corrupt during the US Open. Thankfully his suspension only applies to ATP Tour, and his appearance at the Davis Cup is not breaking any rules.

Hewitt said that Kyrgios has been working his way back into the good graces of the powers that be after he got overlooked for the qualification tie as a result of failing to meet new standards for behaviour and performance. Hewitt let it be known that he’s been watching the volatile player closely, and said that the suspension did not affect his decision to include him in the team. He explained that Kyrgios has done everything required of him in the past, and hasn’t yet put a foot wrong.