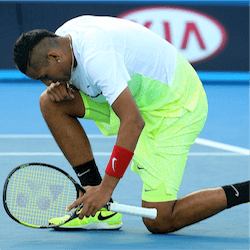 In a disheartening blow for green-and-gold tennis fans, Australia’s 2018 Davis Cup World Group challenge came to an end in Brisbane on Sunday, despite being the tournament’s eighth seeds. Nick Kyrgios, hoping to equalise against Germany’s 2-1 lead, played Alexander Zverev, a young star looking more formidable in every match.

Kyrgios, who won the men’s singles in the Brisbane International earlier this year and then made it as far as the Round of 16 at the Australian Open, has managed to pick up an elbow injury, however. Unable to rely on his powerhouse serve, he succumbed to the German 6-2, 7-6 (7-3), 6-2.

The loss rendered the final scheduled tie unnecessary; Germany progressed to the World Group quarter-finals with a 3-1 win in the round.

A gutted Kyrgios later told reporters that the defeat left a “bitter taste” after his successful summer, and that he’d happily have swapped his Brisbane International trophy for success in the Davis Cup tie.

To return in the World Group in next year’s Davis Cup, they’ll need to finish in the top half of the playoffs ladder. Otherwise, they face relegation to the regional competition next year.

Germany to Face Spain in Quarter-Finals

Zverev and the German team are through to the 2018 Davis Cup quarterfinals, scheduled on April 6-8, where they’ll play Spain. The Spanish knocked out third seeds Great Britain over the weekend, so their encounter with Germany promises some hard-fought matches.

Defending champions and tournament top seeds France, meanwhile, are also through, after defeating the Netherlands on Sunday. They face Italy in the next round, after Italy knocked out Japan.

Kazakhstan took a shock win against fifth seeds Switzerland, while fourth seeds Croatia beat Canada, with the two victors also set to meet in the QFs. The final QF pairing is the USA, who knocked out seventh-seeded Serbia on the weekend, against second seeds Belgium, who beat Hungary.