All the Latest on US Open Tennis 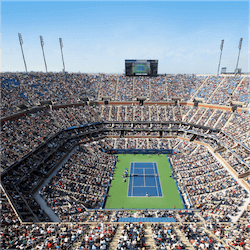 In three weeks’ time, the 2017 tennis Grand Slam tour will end as it began in January, on a hard court. After Wimbledon’s grass and the French Open’s clay, it’s no surprise that in the men’s singles at the US Open, scheduled at the USTA Billie Jean King National Tennis Center in New York from 28 August – 10 September, the two players at the top of the betting are the two who battled it out in the final of the 2017 Australian Open: Roger Federer and Rafael Nadal.

Both were coming back from long breaks in Melbourne, with Nadal seeded ninth and Federer 17th at the start of the tournament. Going into the US Open, after taking both the Australian Open and Wimbledon this year, Federer is now the third seed, but the bookies reckon he’ll clinch another one in NYC. He’s at the top of the betting, at odds ranging from $1.10 to $2.50.

Nadal, top seed for the US Open but behind Federer in the betting, is at $2.10-$2.75, following his record 10th French Open title in June. World No. 1 Andy Murray will be the second seed in New York, but he’s ranked fourth in the betting, although odds offered on him cover a wide spectrum, from $4.50 to $10.00.

Zverev Could Be a Serious Threat

There’s a rising German star that Australian punters may want to pay close attention to in the US Open: 20-year-old World No. 7 Alexander Zverev. He made it to his first Grand Slam fourth round at Wimbledon this year, and he’s actually third-favourite in the US Open betting, although seeded fourth behind Federer. Betting fans wanting to back the youngster to cause an upset can get him at between $7.00 and $10.00.

Punters looking for longer odds should consider Maria Sharapova, who has received a wild card to play in her first Grand Slam since returning from a doping suspension. The winner of five Grand Slam titles, including the 2006 US Open, will be itching to re-establish herself, and she’s being offered at between $7.00 and $16.00.

Sharapova is a very long shot, however. Although she returned to competition in April, she didn’t get a wild card for the French Open. Then she failed to qualify at Wimbledon due to injury niggles, which may still be severe enough to affect her performance in New York.