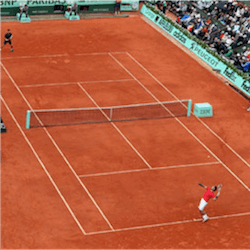 From May 22 to June 11, Australia’s tennis fans will be watching the French Open at Roland Garros, and online betting fans are already weighing up the top contenders. No less an authority than Pat Rafter is backing Rafael Nadal to win the men’s singles.

Rafter was basing his assessment on Nadal’s form in the Australian Open earlier this year, in which the Spaniard’s epic final to finish as runner-up to Roger Federer made it clear that he has recovered from the wrist complaint that hobbled him for two years.

But there are other reasons to consider a punt on Rafa, at 11-4, at Roland Garros. He’s an acknowledged clay-court specialist, at his best in Paris. He’s also the king of the French Open, holding a tournament and Grand Slam record of nine championships

According to the bookies, however, Nadal is only the second favourite for the men’s singles. World No. 2 Novak Djokovic is likely to be top seed, and he is currently being offered at 13-8. But Australian punters will want to take a look at the results of Mexican Open that ended in Acapulco on 05 March.

The Serb met his match in the quarterfinal against Nick Kyrgios, so betting fans may take another look at the Australian’s 25-1 odds in Paris. Nadal made it to the final in Acapulco, but lost in a shock two-set upset to American Sam Querrey.

The main news in the French Open women’s single at the moment is the uncertainty hanging over Maria Sharapova. The Russian only returns to international competition after her doping suspension on 26 April in Stuttgart, so she won’t have the points required to qualify for the French Open by the six-week cut-off date.

Normally, a player of her stature would be granted a wild card, but Roland Garros has recently spent millions on an anti-doping initiative. Some argue that it would be inappropriate, under those circumstances, to grant Sharapova a wild card immediately after she finishes a 15-month suspension for meldonium use.

Whether Sharapova makes the field or not, World No. 1 Serena Williams, the 2016 French Open runner-up and 2017 Australian Open champion, will be top seed in the women’s singles, and she’s the bookies’ favourite too, at 2-1. But defending French Open champion Garbine Muguruza at 9-2, Simona Halep at 10-1 and Angelique Kerber at 12-1 will also offer strong competition.