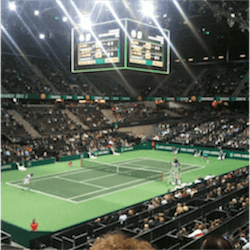 The tournament is in its 44th year and sees many great athletes looking to compete in this 2017 installment that started on February 13th and runs up until completion on February 19th. The field of competitors is not to be sneezed at and features the likes of Stan Wawrinka (2015 winner), Marin Cilic, Dominic Thiem, Rafael Nadal, Tomas Berdych (2014 winner) and many more.

Players will be on the hunt for coveted ATP points as well as their share in the generous prize money that is up for grabs and is said to be over €1,700,000. Definitely an incentive for all to hope for a good finish as the tournament gets underway. There are 32 singles matches to be played and an additional 16 matches featured in the doubles format of the game of this hard surface venue.

As far as ATP 500 events go, this is definitely one that athletes look forward to annually and February 19th promises to hold a nail biting final as the big names line up for their respecting match draws in the next few days.

The selection of players in this tournament will not disappoint tennis fans, there are some surprise wild card entries that have been added to the mix that will surely add a new dimension to the proceedings. The Memphis, Tennessee venue will be The Racquet Club Of Memphis and is expected to host the event with the same professional level of efficiency as always and great turnouts are expected for the event.

Here are some interesting stats for this years Memphis Open: the singles event sees participants from all over the world, 13 different countries to be exact. 5 of the players featuring in this tournament find themselves ranked among the ATP Top 35 and Sam Querrey sees his 11th consecutive appearance at this event.