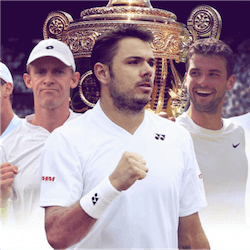 The men’s quarter finals will be taking place today and determines who will face off in the Wimbledon finals this year. Currently the title will belong to one of four great competitors, Andy Murray, Martin Cillic, Roger Federer and Novak Djokovic.

They still need to make it through their quarter final matches this week but they have received the best odds for making it to the finals.

The players have already received odds on their shot to win the finals so let’s take a closer look.

The outright favorite amongst bookmakers, Roger Federer is in a prime career position. He has the experience and the skill to take this Wimbledon from the other contenders. He has been a very consistent player so far.

He is facing off against Milos Raonic and if he passes the test he will be in the running for his 8th Wimbledon title.

Murray will be duking it out against American Sam Querrey, a 24th seed player who has impressed the crowd in making it this far.

Murray entered the tournament quite poorly with much doubt raised about his mental and physical preparedness and fans thought that he would not make it to the semi-finals but once again the Brit has clawed his way up through the ranks and he stands great odds of beating Querrey to enter the Semi finals.

Novak Djokovic faces Thomas Berdych in what may be a foregone conclusion. Berdych has not beaten Djokovic in 4 years and based on their performance this year, Djokovic is the favorite to walk out of this match victorious.

What may hamper Djokovic in the semi finals and finals is his recurring right shoulder injury that required him to take a time out in his match against Adrian Mannarino.

This long standing injury will give him less favorable odds in the finals, but it is already a testament to the player that he has made it this far while nursing it.

Cilic Faces Gilles Muller and he will definitely have his work cut out for him. Muller is responsible for sending Rafael Nadal packing in a truly epic 5 set match. He has previously lost to Cilic at the Queen’s open but his hard fought victory could bolster his resolve and give him the edge in this quarter finals match.

That said, Cilic is still the bookmaker’s favourite to win this one. This is his fourth quarter finals showing in as many years so the player definitely has the edge in experience on Muller who is making his maiden showing at Wimbledon. Cilic has previously lost out to Wimbledon glory after losing to both Federer and Djokovic, making him the long shot at this year’s event.