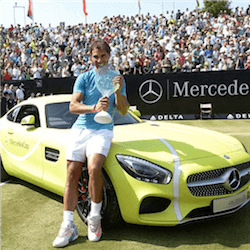 The final three rounds of Mercedes Cup tennis, as the ATP Men’s Singles competition in the annual Stuttgart Open is now known, produced some hard-fought tennis along with excellent online betting action for Australian sports fans. In the quarter-finals, French fourth seed Lucas Pouille and unseeded Spaniard Feliciano Lopez both hit a wobble.

For Pouille, it was in the second set of his QF against Germany’s Phillip Kohlschreiber. After winning the first set 6-4, Pouille allowed the German back into the match with a 2-6 loss in the next. Luckily for the Frenchman’s fans, he regained his concentration to win the final set 6-3.

Lopez went down 6-7 in the first set to Tomas Berdych, the tournament third seed, when the Czech won the tie-break 7-4. It’s a much more intimidating deficit in a three-set format, but Lopez held his nerve and won the next two sets 6-3 and 6-4.

In Saturday’s semi-finals, 23-year-old Pouille had to work hard to defeat Benoit Paire: his 28-year-old countryman took him to a tie-break in the first set. Pouille won the tie-break 7-5, to take the set 7-6, but Paire wasn’t rolling over. Pouille proved the stronger, though, and eventually took the second set 7-5.

Lopez had a much harder time in his semi, up against German sixth seed Mischa Zverev. The World No. 29 took the first set 7-6, imperiously winning the tie-break 7-2. But the Spaniard hit back doggedly, forcing another tie-break in the second set, which he won 7-4. Zverev still made him work for it, but Lopez took a vital break to win the final set 7-5.

In Sunday’s Mercedes Cup final, it looked at first as if Lopez was going to overpower Pouille in short order. He took the first set 6-4 and was well on his way to taking the second, when the Frenchman found his rhythm and saved four break points in succession. The set went to a tie-break, which Pouille won 7-5.

In the final set, Pouille stepped on the gas and began serving like a champion, to win 6-4 and finish the match the winner by 4-6, 7-6, 6-4. He delivered a total of 29 aces throughout the game, and the Mercedes Cup is his second title of the season: he also won the Hungarian Open in April.