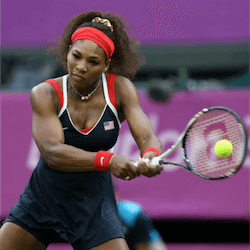 Confirmation came courtesy of a Snapchat post showing  off her bulging tum, captioned “20 weeks”. Which means that Serena was technically already carrying the tiny doubles partner when she beat sis Venus in the singles final in Melbourne.

Her absence from competition ever since hadn’t drawn undue attention; fans agreed that her record 23rd Grand Slams singles titles had earned the 35-year-old a spell resting on her laurels, even if the break did allow Angelique Kerber to regain the Number One spot on the WTA ladder.

Williams has been engaged to Reddit co-founder and tech entrepreneur Alexis Ohanian since December 2016. They began dating after meeting in Rome 15 months earlier.

Contenders at the Top of the Ladder

Williams is expected to be out of the WTA Tour for at least a year, which will allow everyone below No. 2 on the WTA Rankings a shot at moving up a place. It also means the remaining 2017 Grand Slams, and several other tournaments, are wide open.

Aussie tennis punters will be watching Kerber closely. The German had already regained the top ranking before Williams’ announcement, coming back strongly after a faltering start to the year. She will remain a formidable opponent every time she plays.

Britain’s Joanna Konta, who went from World No. 151 to the Top 10 within two years, is also having a phenomenal year. She’s currently at No. 7, but her star continues to rise, and she could be challenging for the top spot soon.

Karolina Pliskova could prove to be Kerber’s biggest threat. She’s at a career-best No. 3 on the ladder, and already has two titles under her belt this year to go with her runner-up at the 2016 US Open. The Czech has also shown that she has the big-match temperament she’ll need to make it to No. 1 on several occasions.

And don’t rule out Anna Sharapova, back from her doping suspension. She’s ahead in her contests with Kerber 4-3, and with Pliskova 1-0; in fact, the only player to beat her repeatedly in Grand Slams has been Serena Williams. So she is definitely in with a shot at the top of the ladder this year.