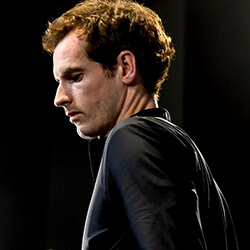 Andy Murray will not be taking part in January’s Australian Open because of an injury to his pelvis.

The three-time champion of the Grand Slam, aged just 32, aimed to take part in his first Grand Slam Singles match in January, since his appearance in Melbourne one year ago. Fans will remember his emotional distress when he made it public that his career may well be over due to injury at a news conference last year.

He will also not play at the inaugural ATM in Great Britain next month.

Murray said that he’s had a setback and, as a precaution, needs to work through it before he can begin competing once more. He spoke of his deep disappointment at working so long and so hard to be able to play at the top level only to not be physically able to take part in top-tier games.

He has not been seen on the court since the British opening tie at last month’s Davis Cup Finals because of this issue. He underwent surgery on his hip almost a year ago and did not travel to Miami to finish his training block for December. Although he has been on the courts recently, his injury has not healed as it should.

Murray and his team, which includes Jamie Delgado as his coach, Matt Little as his fitness mentor, and Shane Annun as his physiotherapist, have decided not to rush back into the 2020 season.