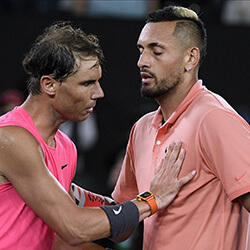 Spain’s No.1 seed Rafael Nadal has beaten his rival Nick Kyrgios in an adrenaline-pumping four-set game and will be going forward to participate in the Quarter-Finals for the Australian Open. The 33-year old victor has dropped not a single set so far, but 23rd seed Kyrgios gave him hell!

Kyrgios donned a Basketball shirt in tribute to Kobe Bryant after his tragic passing on Sunday the 26th of January during the warm-up and battled Nadal hard through 6-3 3-6 7-6 (8-6) 7-6 (7-4). Nadal came through, however, and will be facing Austria’s No. 5 seed Dominic Thiem next.

Nadal and Kyrgios’ relationship has been a rocky one, with their rivalry exploding last year after a contentious meet-up in Acapulco, the beach resort town on the Mexican Pacific coast. The 19-time winner of the Grand Slam called Kyrgios disrespectful afterwards, to which the 24-year old Australian responded by calling him bitter.

But each player’s appreciation for the other’s ability has never been in doubt, despite their styles being as wildly contrasting as they are. This was evidenced by the firmness of their handshakes over the net after the riveting Rod Laver Arena contest.

Nadal, who has won just one Australian Open title, back in 2019, said that he was impressed by the way Kyrgios had played and mentioned that his rival’s positive attitude brings a much more beneficial light to the sport they share. He stated that Kyrgios has all his encouragement if he continues to work the way he is at the moment and added that he is one of the biggest talents on the tour.