Nadal Building His Success At The French Open Once Again 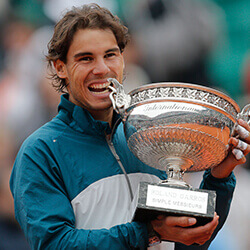 One of the best players in the world right now, Nadal currently retains a 79-2 win-loss record on Parisian clay, having had one of his best seasons yet.

The player has seen his career skyrocket in recent times after winning at both Barcelona and Monte Carlo, as well as claiming a new 50 consecutive set record. This also comes not longer after his comeback in Rome after his defeat in Madrid. In fact, Nadal has been unstoppable for the past three years, and saw his last defeat in 2015 against Novak Djokovic.

Right now, the only other player that has seen any luck against Nadal is Dominic Thiem, who ended Nadal’s 50 consecutive win streak. Henri Leconte, a runner-up from 1988, says that Nadal could be vulnerable to Thiem in upcoming games. Leconte explains that despite Thiem beating him in Madrid, Nadal remains as number one.

But he goes on further to say that the biggest threat to Nadal’s winning streak right now is 21-year-old Alexadner Zverev. Zverev lost his game to Nadal in the final played in Rome, but made up for it with a second set of 6-1.

Leconte believes that, for now, the only players that have a chance at beating Nadal are those from the newer generations, specifically between 19 and 23 years old. Nadal’s winning steak is set to carry on through the French Open as the Spaniard looks to earn his 11th winning title.