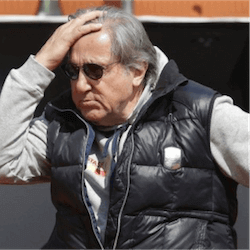 Williams Speaks Out Against Nastase

In a rather unsavoury turn of events, the Fed Cup has been mired in allegations of racism directed at captain Ilie Nastase.

The veteran of tennis and hall of fame member made racial remarks regarding the colour of Serena William’s child with her white husband, Reddit co-founder Alexis Ohanian.

Serena has said the comment from Ilie who is a well-known and respected figure has disappointed her.

She went on to say that society has come a long way in the quest for equality but these comments have shown her that there is still a long way to go.

Nastase did not just end with his racial comments, he also was called out on his sexist remarks directed at Johanna Konta a, a British player, the captain of the British team Anne Keothavong as well as the chair umpire.

These remarks were made during the Fed Cup match between Britain and Romania.

Nastase was eventually ejected from the match and also drew a suspension from the International Tennis Federation.

Williams welcomed the decision by the ITF and she said they have her full support following the decision to suspend Nastase for his comments as well as for his court side conduct.

Williams will be out of tennis for the rest of year in order to complete her pregnancy.

It has been revealed that she had been playing and performing spectacularly while already pregnant for a few weeks.

She is currently back at the top of the WTA rankings. The star has 23 grand slam titles to her name. She is one win away from matching the all time records of 24 titles achieved by Australian tennis star, Margaret Court.

Nastase Has No Regrets

He does not believe anything he said was racist and he does not understand the ITF’s suspension. He does concede that he lost his temper at the Britain and Romania match but he does not feel the punishment fits the crime.

Nastase is a Tennis veteran with two grand slam titles and over 100 ATP titles. His on court behaviour earned him the nickname Nasty Nastase.