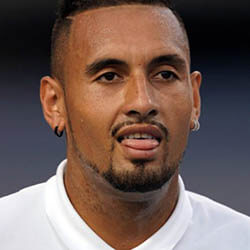 Nick Kyrgios returned from the court and smashed two of his racquets after a Cincinnati Masters defeat, where he lost to Karen Khachanov. The player, in a fit of rage, called the umpire a tool while he was being filmed. The 24-year-old Australian player walked off of the court after he had lost his second set against the wishes of Fergus Murphy, the umpire of the game.

He then proceeded to slam two of his racquets into the ground in the corridor, and during the third set he directly engaged with Murphy more than once. Russian Khachanov, who is 23, had dominated the deciding set of the match, ultimately winning 6-7 (3-7) 7-6 (7-6) 6-2 and advancing to round three. Khachanov, who is set to be play against Lucas Pouille for the last 16, stated that Kyrgios was a talented player but that his head was not in the right place.

Kyrgios had clashed with Murphy in the past during the Washington Open, while also wearing at the official at Queen’s earlier this year in June. For his second set in Cincinnati, Kyrgios made it clear that he felt the shot clock, which counts seconds between points, was being started early, and was losing his composure on the court. He told the umpire that he was the worst, and was handed a court violation at the end of the second set, which prompted him to walk off of the court to smash his racquets.