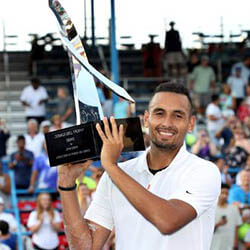 Australian Nick Kyrgios stated that he had one of the greatest weeks of his life after winning sixth ATP title at the Washington Open.

24 year old Kyrgios overcame back spasms and a poor opening set to best Daniil Medvedev, seeded third, 7-6 (8-6) 7-6 (7-4). He managed to hit 18 aces and never had a break point against the Russian player, who is now set to move back into the world’s top 30.

Medvedev, who is 10th in the world, was leading 5-2 for the first-set tiebreak, but Kyrgios saved a set point and claimed the game in 41 minutes.

Kyrgios sent down an ace make two match points, and needed only one to win – making it his second title of the season after he won in Acapulco in March in one hour 34 minutes.

He had beaten Medvedev in three sets during their previous meeting, which was played on the clay courts of Rome earlier this year

Talking about the win, Kyrgios stated that it was crazy to have been able to turn it around, and that he had worked hard to be a better person and played. He added that he had lost faith that he could still have weeks like that and be happy, and that he thankful for having his family for support and not losing faith. The win has also improved the Australian’s impressive record against top 10 contenders this year to five wins and one defeat.