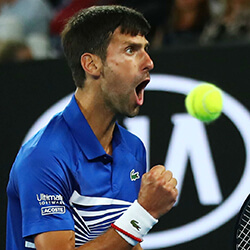 Novak Djokovic has won this year’s Australian Open, marking a record seventh victory at the event for the player, and his third successive Grand Slam after beating Rafael Nadal in Melbourne.

The Serbian player, who rarely has trouble with his server, earned the win with 6-3 6-2 6-3 for his biggest victory in a major final against one of the world’s best players. Nadal, 32, looked shaken throughout the match by the world number one, and made 28 unforced errors by the end of the game.

31 year old Djokovic claimed victory in two hours and four minutes, and moved ahead of six-time winner Roy Emerson and Roger Federer. Djokovic, a forehand-hand winner, brought two championships points, and took the second after Nadal shot a backhand long. Djokovic, top seeded, dropped to his knees after his victory at the Rod Laver Arena, and smacked the court with both hands as he screamed into the sky.

The US Open and Wimbledon champion has now claimed his 15th Grand Slam title, which has moved him to third ahead of American Pete Sampras in the top list of all time, and is closing on Federer and Nadal.

Djokovic has continued his record of winning every event where he managed to get into the semi-finals, while Nadal has lost for a fourth time while playing at Melbourne. Nadal’s result means that the player was not able to become the first man in the Open era to win all Grand Slams at least twice.