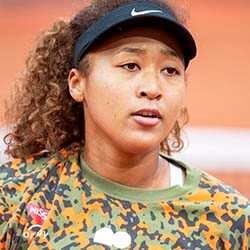 Tennis great Naomi Osaka has announced that she won’t be answering any questions from the press during this year’s French Open at Roland Garros. Osaka cited the effect of press conferences on the mental health of players as the reason behind her decision.

The 23-year-old elaborated by saying the press are known to ask questions already asked, and questions clearly meant to sow doubts into the hearts and minds of athletes and players.  She said she simply does not feel the need to subject herself to the predatory whiles of the media willingly – adding that the decision wasn’t meant as a personal attack on those journalists and publications she’d become friendly with.

Osaka’s request will now have to be considered and approved by the organisers of the French Open. Many tournaments require players to interact with the press, with some players in the past having racked up massive fines when refusing.

The Japanese player is well known for her social justice and equality efforts. During last year’s US Open, she wore masks bearing the names of the victims of several victims of racial injustice, including that of George Floyd. Osaka ultimately went on to win that particular event, as well as this year’s Australian Open.

The tennis star is yet to make it past the third round at Roland Garros, having on three previous occasions exited before the fourth round of the event. She missed out on last year’s edition of the French Open due to a hamstring injury.