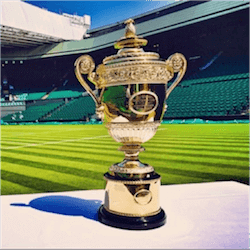 Getting Ready for 2017 Wimbledon

Whether royalist or republican, no Australian tennis fan disputes that the spiritual home of tennis internationally is at Wimbledon, England. So iconic is the All England Club’s annual The Championships, Wimbledon, that the first half of its official name has fallen into complete disuse among tennis enthusiasts and sports betting fans alike.

It’s probably the most widely known and watched of the grand slams every year, and was first played 140 years ago, in 1877. However, 2017 Wimbledon will only be the 130th edition of the tournament, as it was interrupted, like most of the great international sporting challenges, by both World Wars.

The tournament will run from 3-16 July this year, and punters will be keen to see if Andy Murray can defend his 2016 Gentleman’s Singles title. The 2016 Ladies’ Singles champion, Serena Williams, is now pregnant, so 2016 runner-up Angelique Kerber has one less daunting obstacle in her path, as she takes another shot at winning her first Wimbledon.

World No. 1 Kerber is certainly going to be hungry for a victory in July. She’s just crashed out of the French Open in the first round, the first time that has happened to a women’s top seed in the Open era. Although she has managed to remain top of the women’s rankings all year, Kerber has not been in her best form; a fact highlighted by her 6-2, 6-2 loss at Roland Garros to Ekaterina Makarova.

Kerber isn’t the only star who suffered an early disappointment in the Paris tournament. Petra Kvitova, seeded 15th in her first comeback tournament since she was injured by a knife-wielding burglar in her home, also exited the French Open unceremoniously in the Round of 64.

Although the Czech star seems fully recovered from the severe injuries to her left hand that she sustained in the attack, she didn’t have enough to overcome US qualifier Bethanie Mattek-Sands, who won the match 7-6, 7-6, taking both tie-breaks 7-5.

But Kvitova has been champion at Wimbledon twice, in 2011 and 2014, and now that she’s got back on the horse, so to speak, she could present a formidable challenge to Kerber in July.