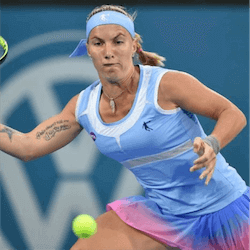 With total prize money of more than three-quarters of a million dollars and a 15-year history, the Qatar Total Open attests to the continued growth in the popularity of tennis in the UAE. An event in the WTA Premier series, the 2017 Qatar Total Open will be held next week at Doha’s Khalifa International Tennis and Squash Complex.

Final qualifiers will begin on Monday, followed by four rounds until singles and doubles finals on Saturday. Australian sports betting enthusiasts will be impressed by the strength of the field: the event has attracted no less than six WTA Top 10 players. The top six seeds are World No. 2 Angelique Kerber, No. 3 Karolina Pliskova, No. 5 Dominika Cibulkova, No. 6 Agnieszka Radwanska, No. 7 Garbine Muguruza, and No. 10 Johanna Konta.

Despite her exit in the fourth round of the Australian Open last month, Kerber is still second only to Serena Williams in the world rankings. The German won both the Australian Open and the US Open in 2016, and finished runner-up to Williams at Wimbledon, so she is expected to be a good bet in Doha.

Kuznetsova out with Abdominal Injury

There are several other players who currently feature high enough in the WTA ladder to constitute a threat to the top seeds, however, which should enhance betting options. World No. 14, Spain’s Carla Suarez Navarro, is the defending champion, so she will be doing her utmost to become only the fourth player to win the tournament twice. If she succeeds, she will be in the company of Maria Sharapova, Anastasia Myskina and Victoria Azarenka.

World No. 8 and 2009 French Open champion Svetlana Kuznetsova, however, is out of contention. The Russian announced that she had to withdraw due to a minor abdominal injury, which doctors have advised her to rest so that she can be back in contention later this season. Nevertheless, the remaining talent in the 32 singles and 16 doubles draw should make for a thrilling tournament.