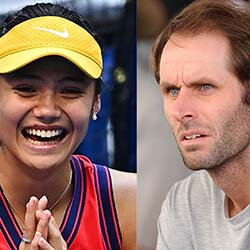 British tennis No. 1 Emma Raducanu has a new coach.

Speaking after her loss to Wang Xinyu at the Upper Austria Ladies Linz, the young star confirmed she’ll be making use of the coaching services of Torben Beltz, the man who coached Angelique Kerber to her place at the top of the ATP world rankings.

This means Beltz will coach Raducanu through her first full season following her fairy-tale US Open win.

Raducanu said she recognises what an enormous privilege it is to have somebody like Beltz on board her coaching staff and that she’s excited about the prospect of getting together with him soon.

The Brit has been looking to acquire the services of a new coach since her split with Andrew Richardson shortly after her US Open win.

She’s found a well-known figure on the WTA tour in Beltz, himself a former ATP player for a brief stint before injury forced him to make the switch to coaching instead. The 44-year-old enjoyed incredible success with Germany’s Kerber. A hard worker and elite athlete, Kerber holds three Grand Slam titles and an Olympic silver medal.

During Kerber’s first sting with Beltz, she rose into the top 10 at only 16 years old. Then, during their second stint together, she won both the Australian Open and the US Open.

Another phenomenally successful partnership for Beltz had been with Croatian Donna Vekic, who under his tutelage rose from outside the top 50 into the top 20.