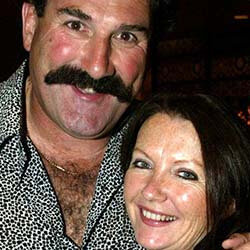 AFL legend Robert “Dipper” DiPierdomenico and his wife of 41 years have separated.

Estranged wife Cheryl detailed the separation in a post on social media, describing the fact that her marriage to DiPierdomenico had broken down as devastating and heartbreaking. She wrote about how the AFL icon had approached her in September last year about giving their broken-down marriage a “second chance”, and how she had mistakenly believed that he had been sincere in his request. The marriage apparently reached a point of no repair on Valentine’s day, and over unfaithfulness on the former athlete’s part.

According to a local Australian newspaper, Dipper had sent flowers and champagne to an ex-girlfriend on Valentine’s Day. The penny however dropped when the former mistress posted pictures of the gifts to social media – only for Cheryl DiPierdomenico to discover that those gifts had been sent by her husband.

Upon confronting Dipper about the inappropriate gifts, he reportedly claimed that the flowers had been sent because of a recent death of a loved one. He had no explanation to offer about the accompanying bottle of bubbly.

The Australian Football Hall of Famer played an impressive 240 games for Hawthorn over a 17-year AFL career, which included him winning a total of five VFL premierships as well as a Brownlow Medal. Dipper finally got his Hall of Fame-moment and inclusion in 2008.

He recently appeared as a contestant on “I’m a Celebrity … Get me out of Here!”, and at the time of its recording, which was sometime last year, spoke about how he had erred and how much he missed his family.