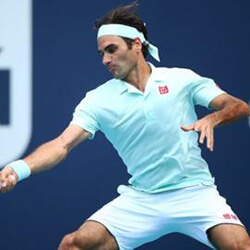 Three-time winner Roger Federer has moved into the quarterfinals of the Miami Open after beating Russian Daniil Medvedev with a straight set victory. Swiss Federer, who won the title in 2017, bested Medvedev – 13th seeded – 6-4 6-2 in one hour and one minute. The 37-year-old fourth seeded, who claimed 22 winners and won nine of the final 11 games he participated in, is now set to take on South African Kevin Anderson for the last eight.

Talking about his latest win, Federer stated that he thought it was an interesting match, and that there were long tactical points and long rallies, and that the big points went his way. He added that his has been serving well and hopes he can carry his current luck to the next round.

Federer, who is currently world number five, has lost to Anderson once in a total of six meetings, during Wimbledon in 2018. Anderson beat Australian Jordan Thompson 7-5 7-5 and reached the quarterfinals in Miami. Talking about Anderson, Federer said that he is a great player, and has one of the best serves in the game right now.