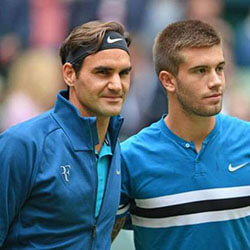 World number three Roger Federer held on to two match points and defeated 13th seeded Borna Coric 2-6 6-4 7-6 and has advanced to the quarter finals of the Italian Open. Federer, who is taking part in the event for the first time since 2016, recently beat Joao Sousa in straight sets on the same day. 22-year-old Coric, who had not played since he beat Cameron Norrie, returned to play against Federer 4-0 in the lead, but Federer managed to claim victory for himself in two hours and 31 minutes. Rafael Nadal and Novak Djokovic also ended their day with comfortable victories.

It was the first time that Federer and Coric were meeting one another on clay, and the Swiss player was already leading 3-2 thanks to his previous encounters, having won the most recent 6-2 6-2 while they were playing in Dubai. Federer lost the opening set and after being treated for a blister, he claimed his first break point at 3-2 ahead in the second set.

Although it was not taken, a cross court forehand led to another break in a quick succession of serves, which ended with another break from Federer who took the set. The Swiss saved a break point for the fifth and ninth games during the decider, and then two match points for the deciding tie-break – quickly going on to finish the game in his favour. Federer will next be facing Stefanos Tsitsipas.