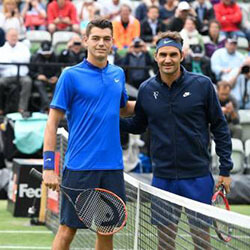 Roger Federer proved his well-known skill after beating American Taylor Fritz and advancing to the fourth round of the Australian Open. The defending champion claimed victory with a final score of 6-2 5-7 and 6-2 under the roof of the Rod Laver Arena during a rainy day in Melbourne Park.

The 37 year old Swiss, who is currently third seeded, is hoping to become the first player to win seven Australian Open titles. Hie next opponent comes in the form of fourteenth seeded Stefanos Trissipas of Greece, who recently beat Nikoloz Basilashvili 6-3 3-6 7-6 (9-7) 6-4.

Joining Federer for the fourth round of the tournament will be former semi-finals Tomas Berdych from Czechoslovakia, who bested Argentine sixteenth seeded Diego Schwartzman 5-7 6-3 7-5 6-4. Berdych, who is unseeded at the moment, and beat British Kyle Edmund in the first round has finally found his form after an injury-laden 2018. He set to play the winner of the upcoming match between Australian Alex de Minaur and world number two Rafael Nadal.

Federer performance was ruthless fro the start of the match, and broke Fritz’s second and third service game as he made his way to his 5-1 lead. He finished the set with an ace with 20 minutes left on the clock, and carried on in much the same form in the second. The American attempted to apply pressure on Federer’s serves, but he ultimately proved unshakeable as he retained his lead for the rest of the game.