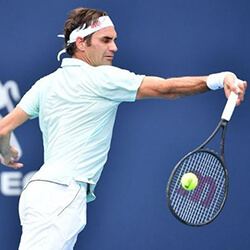 Roger Federer managed to overcome an otherwise sluggish start to go on to defeat Filip Krajinovic 7-5 6-3 and Kevin’s Anderson’s serve proved too much for Joan Sousa as both players have advanced to the fourth round of the Miami Open.

Serbian Krajinovic broke Federer’s initial onslaught and gained the advantage with an early 2-19 lead, and it looked like an upset that could have proven to see the Serb player end the game on his terms while he played against the 20 time Grand Slam champion.

Fourth seeded Federer regained his composure and broke back during the next game, seizing the monument after blasting a forehand winner an breaking through Krajinovic’s defence to take the first set. The Swiss then decided to coast thanks to a powerful serve that his Serb opponent was not able to read. 37 year old Federer had stated that he already put his loss to Dominic Thiem in the PNP Paribas Open final at the Indian Wells behind him.

He stated that these days he able to flush it out quickly, and that he it was the worst when he was a teenager, and that he would cry right after losing a game due to being sad and disappointed. Federer is now set to take on Russian Daniil Medvedev after the 12th seeded managed to beat American qualifier Reilly Opelka 7-6(5) 6-7(5) 7-6(0) in a match that saw 42 aces. Anderson saw 12 aces of his own, and beat Portuguese Sousa on the same day.