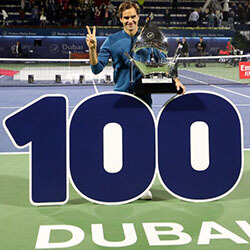 Roger Federer has won his 100th ATP Tour title while playing at the Dubai Tennis Championships, a total of 6600 days after winning his first in Milan. The 37 year old Swiss player, who I also a 20 time Grand Slam champion, managed to best Greek Stefanos Tsitsipas 6-4 6-4.

Federer’s very first ATP title came at the Milan Indoors in 20-001 after beating French Julien Boutter. Talking about his recent achievement, Federer stated that it was an absolute dream come true for him. Federer is set to have his world rank changed to four soon, and has become only the second man of all time to earn 100 titles after American Jimmy Connors, who currently has 109

Adding to his statement, Federer said that it was great to win his eighth in Dubai in combination with his 100th singles title. Federer broke 20 year old Tsitsipas during the first game of the match before he saved two break points past 5-4 to see out the very first set. The Greek, who will be entering the world top 10 for the first time, managed to hold on to his nerve for the second set until 4-4, just before Federer broke the serve again and wrapped the game up in 69 minutes.

Tsitsipas, world number 11, was Federer’s 50th different final opponent, and the 25th opponent of a different nationality. It was the second meeting for the pair, although Tsitsipas beat Federer in their Australian Open match.