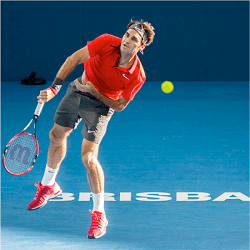 Roger Federer has silenced all retirement rumours, explaining that he had to other option but to sit out of this year’s Australian Open as a result of his recovery from two bouts of surgery to his knee. The tennis great will this year for the first time in his career miss the annual event, which previously led to countless rumours over the possibility of the 39-year-old being on the verge of his official retirement.

Federer has however now managed to clarify his position, and even went as far as pinpointing the date on which he planned to make his long-awaited return. The multiple Grand Slam champion said even though he would not be participating in the Feb. 8 Australian Open, and despite his knee still not being 100 percent, he had agreed to play at the Qatar Open in Doha, which portion of the tour kicks off on March 8.

The Swiss star also said that he had been thinking long and hard regarding when and where he would be making his comeback to the tour, and that Australia had only been a “touch” too early because of the requirements of his recovery from surgery. He added that Australia was one of the places he enjoyed playing the most, and that not being able to compete this year was a major disappointment.

As for his decision to compete in Doha, Federer explained that this would allow him to easy himself gently back into tournament-style play. Making a comeback at a smaller tournament would lighten the load of stress, said the Grand Slam master.