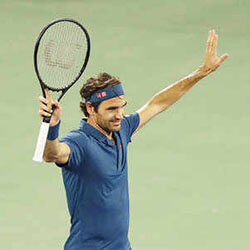 Roger Federer has beaten Marton Fucsovics to advance to the semi finals of the Dubai Tennis Championships, moving ever closer to his 100th ATP singles title. The Swiss player was given a real challenge by the Hungarian world number 24, but ultimately came through and saw victory in an hour and 57 minutes, closing the game with a score of 7-6 (8-6) 6-4.

If Federer manages to claim another victory in Dubai, it will be marked as his eighth win in the country, but more importantly he will become the second player of all time to win 100 singles titles following American Jimmy Connors, whose current record stands at 109. Federer is set to take on sixth seeded Borna Coric of Croatia for the last four.

Coric saw off Georgian Nikoloz Basilashvili 4-6 6-2 7-6 (7-1) after two hours and 27 minutes. 20-time Grand Slam winner Federer, who is currently number seven in the world, is the highest ranking player remaining in the draw, along with Greek Stefanos Tsitsipas, who will be meeting French Gael Monfils in the other semi finals. Monfils needed three sets to beat qualifier Recardas Berankis, and won 6-1 6-7 (3-7) 6-2.

Tsitsipas, who is world number 11, who knocked Federer out of January’s Australian Open, recently beat Polish Hubert Hurkacz 7-6 (7-4) 6-7 (1-7) 6-1. The 20 year old is in the position to break into the world’s top 10 for the first time if he continues his progression in the Dubai Championships.