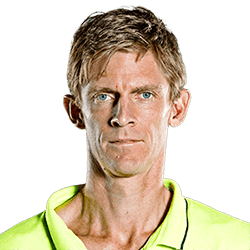 Kevin Anderson is set to receive support from Greg Rusedski as the team pair out to try and knock Roger Federer out of the ATP Finals challenge in London.

37-year-old Federer has won the title a record six times, but is facing a difficult battle as he attempts to move into the knockout stages. The Grand Slam champion suffered a shock defeat on the opening day against Kei Nishikori, only to return to form and besting Dominic Thiem.

Anderson, on the other hand, has won both his first two matches without breaking a sweat, and is poised to knock Federer out in their upcoming face-off. Federer remains the favourite for punters, but Anderson is confident that he will be able to unseat the 20-Grand Slam winner, having beaten him earlier this year at Wimbledon.

Rusedski, who is a former British number one, told reporters that he knows that Federer needs to beat Anderson in order to qualify, and that he believes that Anderson has a better chance of seeing victory.

Annabel Croft, in response to Rusedski, said that everyone is impressed with Anderson, and it’s a good call on behalf of Rusedski for supporting Anderson in his upcoming game against Federer, especially after his impressive performance at Wimbledon.

Meanwhile, Novak Djokovic, the current world number one, has secured a strait-sets victory over Alexander Zverev. The US Open And Wimbledon winner will now be getting ready for his the semi-finals of his group match against Marin Cilic.