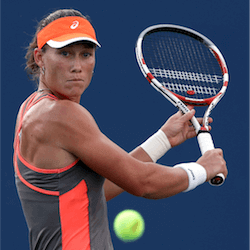 Stosur in Bad Shape going into the Australian Open

Former US Open Champion Sam Stosur will have to use every bit of experience and mental fortitude going into the Australian Open in order to make it past the first round. The veteran tennis star has had a disastrous run lately, not having won a single game in the last five months. To add to her list of woes, the 32-year-old crashed out of the Sydney international, not even making it past the first round.

Set up against world number 27, Anastasia Pavlyuchenkova, Stosur never really looked in control from the first game. Losing the first set 6-3, Stosur was eventually despatched by her opponent in just over an hour claiming the win 6-3, 6-1. Stosur won less than 50 percent of her total serves and only managed to win one break point. The pummelling now stretches Stosur’s losing streak to a total of seven matches dating all the way back to September when she suffered a defeat in Flushing Meadows.

Her list of losses includes a bitterly disappointing first-round exit in Brisbane last week. In a match against word number 7, Garbine Muguruza, Stosur put up a bit more of a fight, eventually losing 7-5, 6-7 and 7-5 to the experienced Spaniard. Australian sports fans had a bit of good news though as men’s qualifier Matthew Barton cruised through to the second round of the Sydney International.

Barton, ranked at 198 in the world rankings toppled Kyle Edmund (ranked at 45) of Brittan with a 7-6 (7-3), 7-6 (7-5) victory. Things didn’t go as well for fellow Australian Christopher O’Connell who was dispatched by Gastao Elias losing 6-7 (3-7), 6-1, and 6-1. Both O’connell and Barton were part of a five-man Australian outfit in the signals draw which included Jordan Thompson, Thanasi Kokkinakis and Alex de Minaur.

On day two, Australian Arina Rodionova became the first local to crash out after losing her opening match to the more experienced 6th seed Johanna Konta. Ranked at 184 in the world, Rodionova had plenty of opportunities to break her opponent but only managed to convert just two of the eight given to her. Konta won the match convincingly 6-3 6-4. In the other matches of the day, 9th seed Robert Vinci defeated qualifier Maria Sakkari in straight sets while world number 5 Dominka Cibulkova hardly blinked in dispatching Laura Siegemund 6-2, 6-0.