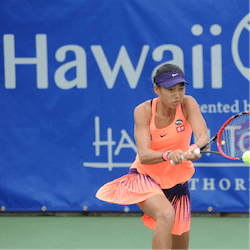 World No. 80 Francesca Schiavone’s 2017 Hawaii Open tournament has ended before it could begin. The 2010 French Open winner, the last wielder of a one-handed backhand to win a WTA Grand Slam title, is out for the rest of the year, and perhaps longer, with an ankle injury.

The 37-year-old Italian, who finished runner-up to Anastasia Pavlyuchenkova in Rabat, Morocco in May and scooped her last win in April at Copa Colsanitas in Bogota, Colombia, succumbed to a freak accident in training.

Practising on court with several balls littering the sidelines, Schiavone stepped back onto a ball, lost her footing and twisted her ankle as she went down. She posted a clip of the incident on her Instagram account to show fans that silly accidents happen even to the pros.

She seems to have taken the setback in a philosophical vein, however, despite having to miss the next WTA 125K Series event in Hawaii, at which she would have been fourth seed.

The accident may have disappointed punters hoping to back Schiavone to shine at the Patsy T Mink Central Oahu Regional Park next week, but it may have an unexpected silver lining. In January this year, the former world No. 4 was talking about retiring at the end of 2017 and settling down to coach in the USA.

More recently, however, she has spoken about the addictive nature of pro competition, and the possibility that she might keep playing on the WTA Tour for another year at least. With her 2017 season now frustratingly cut short, there’s a strong likelihood that tennis lovers will see her back in competition in 2018.

Top Seeds to Reshuffle in Hawaii

Schiavone’s withdrawal means that the seeding at the top of the Hawaii Open will be adjusted slightly. Returning 2016 runner-up Zhang Shuai is probably going to stay top seed, with last year’s winner, CiCi Bellis, in second.