Seeds Tumble on US Open Day 1 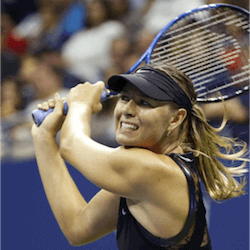 Sharapova Stuns Halep in US Open

Day 1 of 2017 US Open tennis offered some surprises among the singles seeds to keep sports betting fans on their toes. The biggest upset of the day was provided by Maria Sharapova, who has slumped to 146th in world rankings while serving her doping suspension.

Playing courtesy of a wild card in her first Grand Slam since she returned to the WTA Tour in April, the Russian star stunned the crowd at the Arthur Ashe Stadium on Monday night by dispatching tournament second seed Simona Halep 6-4, 4-6, 6-3. Dressed to kill in a lace-trimmed black dress, Sharapova was as agile and aggressive as her fans remember, putting paid to the Romanian’s chances of finishing the US Open with a No. 1 world ranking in 2 hours, 44 minutes.

It was clearly an emotional return for the 30-year-old five-time Grand Slam winner. After taking match point, she sank to her knees as if she’d just won the final, and got tearful as she waved her thanks to the crowd. Sharapova is now fourth in the outright betting to win the women’s singles championship, at odds ranging from $6.00 to $10.00.

Three Surprises in the Men’s Singles

The player ranked No. 2 in Britain behind Andy Murray, World No. 42 Kyle Edmund, provided another surprise in his first-round match. He’s only played Robin Haase once before, in Miami, and the Dutchman beat him there in straight sets. Haase was the 32nd seed at the US Open, but that didn’t stop 22-year-old Edmund returning the Miami favour with a masterful 6-3, 7-5, 6-3 win that left his opponent screaming in frustration from his chair during the breaks.

Kazakhstan’s Mikhail Kukushkin, currently World No. 102, provided an even bigger upset with his 4-6, 6-3, 6-2, 6-1 war of attrition against tournament 21st seed David Ferrer. The Spaniard had a lot of punters backing him, but it may not yet be time to start putting money on Kukushkin or Edmund instead; they’re respectively at $500.00 and $150.00 and above in the betting.