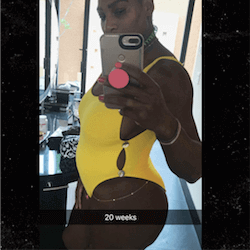 Serena Williams has made the happy announcement the she is 20 weeks pregnant, with her first child. She did so by sharing a close-up picture of her burgeoning belly with her fans on Snapchat, and her legions of admirers very quickly worked out that she must have already been in the family way when she took the Australian Open in January –her 23rd.

Ms Williams, who is currently ranked as the world’s No. 2 tennis player, has not participated in any competitions since her triumph at the Australian Open this January, in which she beat her sister, Venus Williams, with a final score of 6 – 4, in order to take her 23rd Grand Slam title. March saw her pulling out of the Indian Wells and Miami Open, although she cited a knee injury as the cause of doing so.

Ms Williams Will Grace the Courts in 2018

Although Serena will not play any more tennis this year, she is set to return to the tour in 2018. Kelly Bush Novak, her spokeswoman, has confirmed that although there is no chance of any more games this year, Serena is excited about returning in 2018.

Bumping Back Up to No. 1 with a Baby on Board

Williams, who will be returned to the No. 1 world ranking next week, deleted the picture she posted shortly after doing so, and then waited over 6 hours before commenting on it, a decision which stoked furious debate amongst her fans about whether or not her post had been understood correctly. Novak confirmed the news, however, and went on to say that the baby was expected in autumn of this year. The fact that she performed as well as she did in the Australian Open with a baby on the way makes her win all the more incredible!

Things are Looking Good for Serena

Williams broadcast news of her engagement in December 2016, although no wedding date has yet been made known by either the tennis superstar or her fiancé Alexis Ohanian, Reddit co-founder. As she sees her 36th birthday in September this year, this world-class athlete can relax in the knowledge that she has managed to achieve every high point possible as she looks back over her illustrious career.

Aside from winning the Wimbledon title and the Australian Open multiple times, once whilst pregnant, she has also managed to stay in the world no. 1 position for a total of 315 weeks, contributing to her ranking as 3rd in the Open era.

Not the First Female Athlete Set to Return

Paula Radcliffe won the 2007 New York Marathon 10 short months after having a baby; Catherine Ndereba broke world records over 5 and 15 kilometres in 1998, one year after becoming a mother; and Catriona Matthew won the golfing British Open in 2009, with a 2nd child only 10 weeks of age.