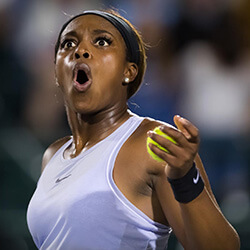 American Sloane Stephens claimed her fourth successive victory over former world number one Victoria Azarenka as Sloane advanced to the 16th round for the Madrid Open. The 26 year old, who is currently number eight in the world, was broken twice by Azarenka during their game – now ranked 52nd in the world – and pushed the match to a deciding set.

Petra Kvitova, the current defending champion, has also won her latest match against world number 63 Kristina Mladenovic 6-3 7-6 (7-5) in an hour and 55 minutes. The Czech player, who is second seeded, is currently aiming for a fourth title on Caja Magica clay, and will be facing either Caroline Garcia or Sorana Cirstea.