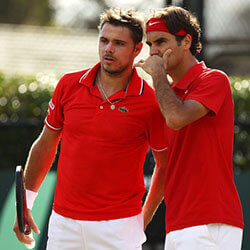 Stan Wawrinka and Roger Federer were both present when Switzerland won the title four years ago, beating out France during the final held in Lille.

The two players, however, will most likely be absent from this year’s competition, instead choosing to focus on other tournaments instead.

Federer has his attention turned on earning another Grand Slam victory at the age of 37, and his latest US Open defeat at the hands of John Millman means that he has made his schedule tighter than before. Wawrinka, meanwhile, has been suffering from a number of injuries over the last year, and has chosen to skip the Davis Cup while he recovers.

Switzerland skipper Severin Luthi has told reporters that fans must not get their hopes up on whether the two will be returning to the Davis Cup. He explained that he does not believe their decisions have changed, but added that the only advantage is that players do not have to play more than three times before they can reach the final.

He lastly added that at the moment, we must not look too far, as the situation may change within the next couple of months, but right now there is no sign that Roger and Stan will be coming back to the event. And while Luthi has attempted to talk Wawrinka into coming back, it didn’t pan out as planned, saying that the two were in contact in New York.