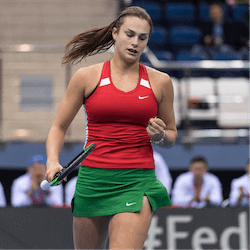 Belarusian teenager Aryna Sabalenka, ranked 78th on the WTA ladder, delivered a shock to the US team in the final of the Fed Cup on 11 November. Her 6-3, 3-6, 6-4 defeat of 2017 US Open women’s singles champion Sloane Stephens on the opening Saturday stunned the American world No. 13 and allowed Belarus to draw level at 1-1 with the USA.

The US would recover by Sunday to win the 2017 Fed Cup final 3-2, but the 19-year-old impressed in her match against Stephens with her utter commitment to every shot, aggressively treading the line between triumph and disaster.

Her all-or-nothing attitude paid off, and the win confirmed her status as the top seed in the Mumbai Open starting on 20 November.

Three weeks ago, Sabalenka finished runner-up to Maria Sharapova in the Tianjin Open, played on hard courts like the Fed Cup final and the Mumbai Open. Based on her current form, online sports betting fans could fancy her to win the Indian tournament.

This year marks the inauguration of the Mumbai Open on the WTA Tour’s 125K Series. The tournament, to be played at the Cricket Club of India from 20-26 November, is a reboot of the Royal India Open.

The last WTA tournament to be held in India, the final Royal India Open was played in Pune in 2012. The revival in Mumbai, and the level of talent competing, is sparking great interest among India’s tennis fans.