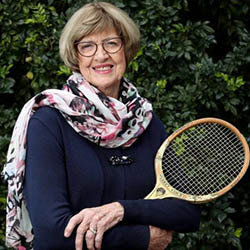 While she will be recognised at Melbourne Park on the 50th commemoration of her 1970 calendar-year Grand Slam sweep, Margaret Court will not be presenting the Women’s Australian Open Champion with the trophy. She has polarised both the public and her fellow players with her recently expressed views on transgender players and marriage equality.

Chief Executive Officer of Tennis Australia Craig Tiley has confirmed the body’s decision not to have Court at the ceremony but was quick to state that the 77-year old’s achievements will still be recognised for the duration of the tournament. He called Court an icon of sport in Australia and said that, while his team has been in contact with her regarding how the acknowledgements are going to be made, there are going to be a few surprises as well.

50 years ago, Margaret Court became the first woman in the era of the Australian Open to win all four Grand Slam Singles titles in one calendar year. She’s presented the winner’s trophy many times before, but after the bristling sermon she delivered on transgender children simply needing to read the bible and find god, it’s obvious why she’s not being requested to do so this year.

Court has received the Order of Australia as well as that of the British Empire, and the former No. 1 has collected more Major titles than any other player, man or woman, in history. She is widely considered to be one of the best Tennis players of all time.