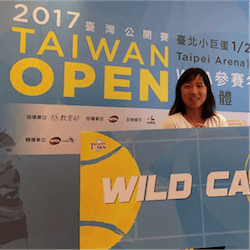 Final qualifiers for the Taiwan Open at the Taipei Arena in the island nation’s capital begin on January 28, with the tournament proper running from January 30 to February 05. Now only in its second year, it is an exciting minor WTA tournament that gives Australia’s fans of women’s tennis something to bet on between the Australian Open and the Fed Cup.

It is also, predictably enough, a tournament that gives Asian players a shot at the spotlight. Part of the logic behind shifting this leg of the WTA Tour to Taiwan last year, after several years in Pattaya, Thailand as the Thailand Open, was to encourage more enthusiasm for tennis among the women of the small Chinese republic.

Two players who needed no urging were Taiwanese sisters Yung-Jan and Hao-Ching Chan, a formidable doubles team currently ranked at No. 12 on the WTA doubles ladder. They were popular winners at the 2016 Taiwan Open, held at the Yang-Ming Tennis Centre in the city of Kaohsiung. It was their second win in a row, because they were the 2015 doubles champions in Pattaya, too. As national heroes, many will be rooting for them when they defend that title in the 10,000-seat Taipei stadium.

Japan’s Misaki Doi Will Be Hungry

Japan is another Asian nation with a popular and growing tennis community, and in the 2016 tournament, Misaki Doi certainly got her homeland’s attention. The 25-year-old made it to last year’s singles final, where she went down to Venus Williams 4-6, 2-6. Williams will not be back for this year’s Taiwan Open, but Doi will be. No doubt she will be doing her utmost to improve her status from runner-up to champion.

She will face strong opposition, however: Doi is one of six WTA Top-50 stars among the 23 players listed so far in the 2016 main singles draw. These include World No. 14, Ukrainian Elina Svitolina, who will most likely be top seed. France’s Caroline Garcia and Latvia’s Anastasija Sevastova, fresh from strong performances at the Australian Open, could also be a threat, as could perennial Serbian strongwoman Jelena Jankovic.