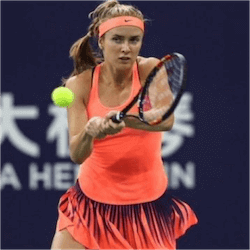 The People’s Republic of China and the Republic of China, or mainland China and Taiwan to most Australians, do their best to ignore each other, politically. The PRC does not recognise the ROC government and claims Taiwan as Chinese territory, which leads to some diplomatic sleight of hand from countries even as powerful as the USA, when they want to do business with Taiwan.

One thing the two rivals don’t miss, is a chance to battle each other in the sporting arena, and thus the 2017 Taiwan Open at the Taipei Arena was more than a fledgling WTA tennis tournament: there was national pride at stake, too. For Australian tennis fans with an eye for long-shot bets, there were enough upsets among the seeds to keep things interesting as well.

Both China and Taiwan saw their players do well, although the hosts were probably better satisfied with the overall results. Chan Hao-ching and Chan Yung-jan, the Taiwanese sisters who won the doubles championship at last year’s inaugural Taiwan Open, successfully defended the title and their national honour.

They were the top-seeded doubles team, and they put Taiwan one up on their mainland opponents when they won their semifinal against the PRC’s Liu Chang and Zheng Saisai. Lucie Hradecka and Katerina Siniakova, both from Czech Republic, were seeded second in the doubles, but succumbed to the Chans 6-4, 6-2 in the final.

Saving face for the PRC was Peng Shuai, who did amazingly well in the singles draw, despite her relatively low WTA ranking at No. 59. Ukrainian Elina Svitolina, current World No. 13, was the tournament top seed and always the favourite to win the singles title, but she proved to be the only seeded player who could make it to the semis.

Peng was responsible for knocking out two of those ranking players: fifth seed Katerina Siniakova of Czech Republic in the Round of 16, and Australian second seed Samantha Stosur in the quarterfinal. In the semis, Peng’s victory run continued when she defeated Czech Wild Card Lucie Safarova, while Svitolina despatched Luxembourg’s Mandy Minella, another outsider who had done remarkably well.

In the final, however, Svitolina proved too strong, finishing off Peng clinically in two sets: 6-3, 6-2. Nevertheless, the Chinese athlete flew her nation’s flag with enough aplomb to ensure that the mainland tennis audience will be eager to see next year’s Taiwan Open.