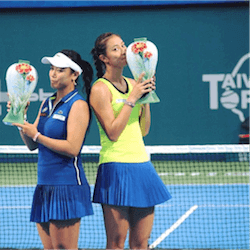 Australian tennis betting fans with time on their hands between the Australian Open and the Fed Cup might want to consider a punt on the upcoming Taiwan Open in Taipei. It runs from January 30 to February 05 on hard courts at the Taipei Arena, after final qualifiers from January 28.

It may not be one of the most important tournaments in women’s tennis, but many players enjoy the competition because it allows them to stay in the same general time zone after the Australian Open, while getting match practice for the Fed Cup and later tournaments in Doha and Dubai.

The doubles tournament is often the poor relation in any tennis championship, but it is certainly worth keeping an eye on Taiwan’s heroes, the sisters Hao-Ching and Yung-Jan Chan, in the 2017 Open. In 2015, they triumphed in the doubles championship of the Thailand Open in Pattaya, the competition that the Taiwan Open replaced on the WTA Tour in 2016.

Last year, the Chan sisters were crowned inaugural Taiwan Open doubles champions too. So this year, as tournament favourites at Number 12 on the WTA doubles rankings, they are playing to secure an effective, if not official, hat-trick in the title. National pride in their achievements goes a good way toward realising the Open’s stated intentions of making tennis more popular in Taiwan, while at the same time sparking more international sporting interest in the island nation.

The success of the first Taiwan Open, held last year at the Yang-Ming Tennis Centre in Kaohsiung, convinced organisers that the tournament deserved a bigger venue; hence this year’s move to a 10,000-seater in the nation’s capital. Last year’s singles winner, Venus Williams, will not be back in 2017, so 2016 runner-up Misaki Doi from Japan must feel she has a decent chance of going all the way.

However, six of the 23 players listed in the singles draw are in the WTA Top 50, including Doi at Number 42, so she faces some stiff competition. Her biggest challenges will probably come from world Number 14 Elina Svitolina from Ukraine, Frenchwoman Caroline Garcia at Number 24, or Latvia’s Anastasija Sevastova at Number 35. And don’t forget Jelena Jankovic, even though she’s now ranked only at Number 54. Whatever her ranking, the 31-year-old Serbian remains one of the most dangerous players in women’s tennis.