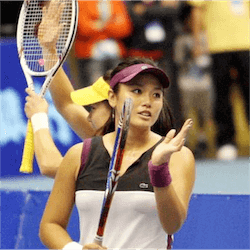 Saturday and Sunday saw the final qualifying rounds of the 2017 Taiwan Open at the Taipei Arena, with six hopefuls going through to the main singles draw for the tournament proper, starting on Monday, January 30. Serbia’s Aleksandra Krunic, ranked third among the qualifiers, successfully dispatched two rivals to book herself a Tuesday berth in the Round of 32 against Czech Lucie Safarova.

Tunisian Ons Jabeur is also through, after beating Japan’s Akiko Omae in her opening qualifier and then seeing Omae’s countrywoman, Ayumi Morita, retire hurt from their match on Sunday. Jabeur meets American Nicole Gibbs in Round 1 on Monday, in a match that had not started at the time of writing.

Australian betting fans might be following Lucie Hradecka’s progress, as the doughty Czech could cause an upset. She cruised through both her qualifying matches in straight sets, and faces Ukrainian Kateryna Kozlova on Tuesday. Slovenian Dalila Jakupovic also qualified for the 2017 Taiwan Open this weekend, for a first round match against Italy’s Francesca Schiavone, also scheduled for Tuesday.

Two more players complete the sextet: Croatian-born New Zealander Marina Erakovic, who was ranked top among the qualifiers at the start of the qualifying round, and Japan’s Miyu Kato. They may be the two qualifiers with the toughest first round ahead, as both their opponents are seeded high in the 2017 Taiwan Open rankings.

World No. 110 Erakovic meets France’s Caroline Garcia, the No. 3 seed in the tournament, in Tuesday’s Round 1 schedule. The 2016 French Open winner and current World No. 24 could prove a tough nut to crack, but if Erakovic beats her, she may be worth a bet as the tournament continues.

Kato, No. 145 on the WTA rankings, plays World No. 33 Anastasija Sevastova, in another Monday match that was about to start at the time of writing. The odds favour the Latvian, who made it to her first Grand Slam quarterfinal at the 2016 US Open.