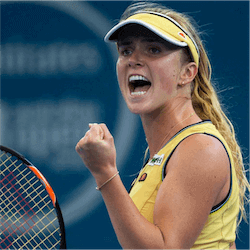 Looking Back at Taiwan Open 2017 Action

The 2017 Taiwan Open, from January 30 till February 05 in the Taipei Arena, might have been only the second time the tournament was held, but the WTA action boasted a field of high enough quality to satisfy most Australian sports betting enthusiasts.

In the doubles tournament, there were no surprises in the result. Defending champions, the Taiwanese Chan sisters, Hao-ching and Yung-jan, were the top-seeded doubles team, and they met second seeds Lucie Hradecka and Katerina Siniakova of Czech Republic in the final. The Chan sisters triumphed 6-4, 6-2, enhancing both their national-heroine status and the popularity of tennis in the small island country.

Ups and Downs of Singles Seeds

In the singles tournament, the eight seeded players enjoyed more unpredictable results. Eighth seed Jelena Jankovic is a championship veteran, but the Serb was bundled out in the first round of the Taiwan Open by Japan’s Kurumi Nara in three tough sets. American Shelby Rogers, the seventh seed, suffered a similar fate when denied a quarterfinal place by Tunisian qualifier Ons Jabeur, the WTA World No. 181.

The Round of 16 also put paid to the hopes of the third and fourth seeds respectively: France’s Caroline Garcia was knocked out by Luxembourg’s Mandy Minella, while Latvia’s Anastasija Sevastova fell to Czech Lucie Safarova. Safarova went on to defeat the 2016 runner-up and 2017 sixth seed, Japan’s Misaki Doi, in the quarterfinal.

Chinese player Peng Shuai, World No. 59, provided some of the biggest upsets, however. Apart from ending Safarova’s run at the title, she also knocked out singles fifth seed Siniakova, and Australian Samantha Stosur, the second seed, to reach the finals. Unfortunately, the tournament top seed, Ukrainian Elina Svitolina, proved too strong for Peng in the final, winning the singles championship 6-3, 6-2.